Drawings, maps and other media

8.0 DRAWINGS, MAPS, and OTHER MEDIA

The following procedures allow field records such as drawings and maps, as well as “media” such as magnetometer and sonar data generated during a field project, to be documented in a standard manner. The procedures also ensure that core data is associated with the original record, and facilitate the efficient transfer of data to an archaeological database or a paper-based record system. Central to the effective management of field drawings, maps, and other media are the Drawing and Media Catalogue Number systems, in tandem with the recording of key metadata for each type of record.

For the purpose of this Manual, “media” refers to the means by which something is communicated, such as instrument-derived data, audio, video (“moving images”), and forms, in either paper or digital format. “Moving images” refers to images created by video cameras, film cameras, etc. in either digital or analog tape format. The cataloguing procedure for media is a new introduction with this Manual, and is an adaptation of the drawing cataloguing procedure employed in previous years.

8.2 DATA STANDARDS for DRAWINGS, MAPS and OTHER MEDIA

Field drawings, plans, and maps must, at a minimum, provide the information under the following headings:

As a best practice, the following should be included, if the data is applicable or available:

These elements are described below. As a best practice, all drawings should be done in the metric system.

An example of a drawing record format (or card) for entering drawing data is shown in Figure 7. This is a variation of the Drawing Stamp and Card system used in previous versions of the Manual (see Parks Canada 1978:57). The format may also be adapted for maps (e.g., NTS topographic maps). 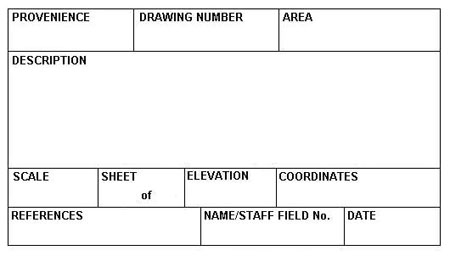 Figure 7. Example of a drawing record format (or card) for entering drawing data. Redrawn by S. Savauge, from Parks Canada (1978).

Enter the most inclusive Provenience Number. Depending on the content of the record, this may be a Site, Operation, Suboperation, or Lot Number. The complete Provenience Number must be used, e.g., 2E43 or 2E43Q or 2E43Q48 would be correct, but 43Q48 or Q48 or other variations of partial provenience numbers are not acceptable.

From the hypothetical examples above, one can determine at a glance that Staff Field Number 101H (“John Smith”) generated four separate field drawings at three different sites (5H, 18H, and 134H) in the year 2004.

Identify the structure, part of a structure or activity area of which the record was made, e.g., “Latrine.”

Identify the drawing as a plan, section (profile), or elevation, and provide a statement of the drawing content and purpose (if applicable).

To specify content, additional Provenience Numbers should be added where applicable. For
example, a plan of Suboperations 2E13Q and 2E13R would have the Operation Number 2E13
entered in the “Provenience” field (Section 8.2.1) and the specific Suboperation Letters listed in this
“Description” field.

Enter the scale to which the drawing was made.

Enter the date on which the drawing was made, in numerical format: yyyy-mm-dd.

Enter the Drawing Catalogue Numbers of the related drawings, including those of other sheets in the case of a composite drawing or mosaic. Also enter related field note pages or forms.

Where possible, enter the spatial or geographic coordinate data pertinent to the drawing (See the Parks Canada Archaeological Site Inventory Form Guide, Appendix A, for examples and descriptions).

A vast array of Topographic (e.g., NTS maps) and other maps (e.g., forestry maps, hydrographic charts, orthographic maps, Geographic Information System (GIS) maps) of various scales are often used to plot the locations of archaeological sites, or indicate vegetation, landforms, and other information for predictive modelling, etc. These maps or representations may be in either paper or digital format, or sometimes both, and may be acquired externally (e.g., from Geomatics Canada) or generated internally (e.g., from a Service Centre GIS database).

When original field data is recorded on such maps, and where the information does not appear elsewhere (e.g., on a master map), the map should be assigned a Drawing Catalogue Number as described above, which should be cross-referenced to the field notes.

This section outlines best practices for cataloguing such media records as remote sensing data, digital and analog video and audio files and tapes, as well as geographic and navigational data, and forms.

As a best practice, the following codes (Table 9) are applied to media records, which include digital files and outputs (e.g., magnetometer output/printout), and analog tapes (e.g., video, audio tapes).

Table 9. Valid Codes for Media Records, with Descriptions and Examples.

As specified in the case of digital images (described above), not all records need to be catalogued; the selection for cataloguing will be based on information content, anticipated research, management requirements, as well as publication and presentation requirements. Only those files identified by the Principal Investigator or delegate to be curated into the records system and referenced in the field notes should be assigned a Media Catalogue Number.