If you take care not to break the pumpkin shell when removing the pulp, you can use it as a serving bowl. 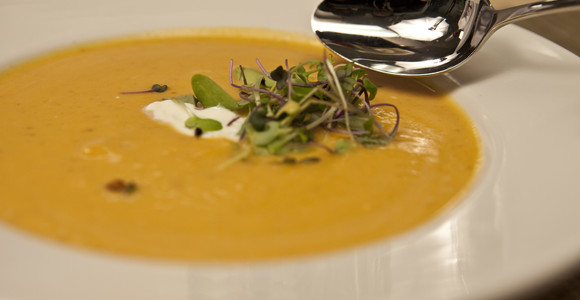 The first explorers, including Jacques Cartier (pictured above), confused the squash (Curcubita) of the New World with melons, which were of European origin. Squash soon crossed the Atlantic, and by the 17th century, pumpkins and other varieties of squash were well-known in Europe. Recipes for squash can be found in cookbooks dating from the mid-17th century. Bonnefons, as an example, devotes an entire chapter to them in his Délices de la campagne, first published in 1654. Marie de l'Incarnation, an Ursuline, used them to make soups, preserves and fritters the European way.

This recipe is adapted from the book A Taste of History: The Origins of Quebec's Gastronomy. Yvon Desloges and Marc Lafrance. Éditions de la Chenelière. Montréal 1989. English-French book. ISBN : 2-89310-028-7. The authors found the original recipe in L'École des ragoûts, which dates to 1700.