John Thompson was a new prime minister with a record of achievement and a promising future when he died suddenly in 1894. He was just forty-nine years old.

Thompson had served briefly as premier of Nova Scotia before being appointed to the Nova Scotia Supreme Court. When John A. Macdonald recruited him to Ottawa in 1885, he quickly became a leading member of the Conservative government. His achievements included the first Criminal Code of Canada. 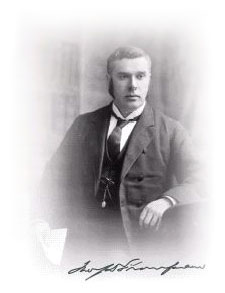 Thompson had been raised a Methodist but converted to Roman Catholicism, the faith of his wife, Annie, in 1871. Controversy over his conversion kept Thompson out of the prime minister's office when Macdonald died but, upon John Abbott's retirement eighteen months later, Thompson became the first Catholic prime minister in Canada.

Sir John Thompson died December 12, 1894, at Windsor Castle, where Queen Victoria had just made him a member of her Privy Council. He is buried at Holy Cross Cemetery in Halifax.