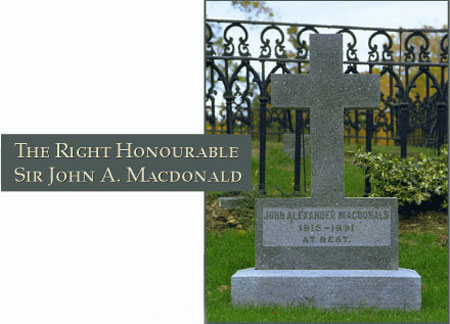 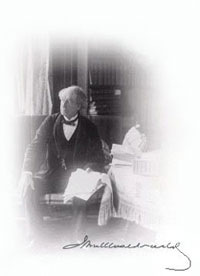 Born in Scotland and raised near Kingston, Ontario, Mac- donald was already a political veteran in 1864, when he played a key role in the making of the Canadian Confederation. He was the undisputed choice to be the first prime minister. "Sir John A." held the office from July 1, 1867 until 1873, and again from 1878 until his death in 1891.

A visionary statesman and a determined Conservative partisan, Macdonald was a brilliant parliamentary tactician and a much-loved campaign leader. He said he intended to see the gristle of a nation harden into bone, and he believed a strong central government was essential to Canada. His National Policy of tariff protection, westward expansion, and a railway to the Pacific helped lay the basis for a transcontinental nation.

Sir John A. Macdonald died in Ottawa in 1891 and was buried in Kingston.