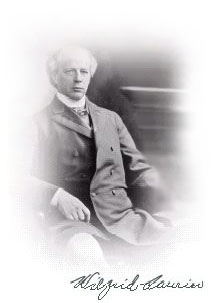 One of Canada's great leaders and the first franco- phone prime minister, Sir Wilfrid Laurier believed passionately in Canada as an English-French partnership. "I have had before me as a pillar of fire," he said, "a policy of true Canadianism, of moderation, of reconciliation."

Always distinguished by his debonair charm and intellect, Laurier was first elected to the House of Com- mons in 1874. There, Laurier gradually built up the strength of the Liberal Party and his personal following in Quebec and elsewhere in Canada. He led the Liberals to victory in the 1896 election, and served as prime minister until 1911.

Laurier led Canada in a period of rapid growth, industrialization, and immigration. His government established the provinces of Alberta and Saskatchewan in 1905. Throughout his career, he faced repeated challenges to his vision of Canada, but he said he preferred "sunny ways" over stormy conflicts.

Sir Wilfrid Laurier died, still leader of the opposition, in 1919 and was buried in Ottawa.