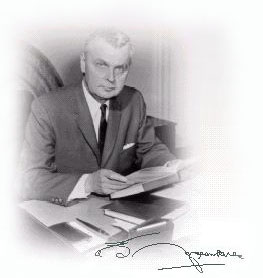 John Diefenbaker, a prairie populist and a spellbinding speaker, was determined that all Canadians would be "unhyphenated Canadians." In 1958, he won the greatest electoral victory in the history of Canada's House of Commons.

Born in Ontario, John Diefenbaker moved to Saskatchewan as a child. After military service in the First World War, he became a successful defence lawyer. In politics, he endured years of frustration before winning the leadership of the Conservative Party in 1956. He unseated the Liberals in 1957 and won his great majority in 1958.

Prime Minister Diefenbaker introduced the Bill of Rights, promoted northern development, and developed new export markets for prairie wheat. Even after the defeat of his government in 1963, Diefenbaker's personal charisma made him loved by many Canadians, and he never lost his House of Commons seat.

John Diefenbaker died in Ottawa in 1979. Thousands saluted the train that brought his body home to be buried in Saskatoon, Saskatchewan.