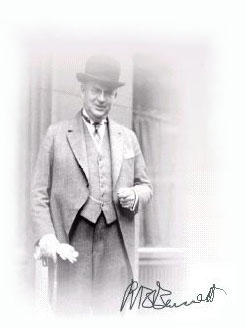 R.B. Bennett became prime minister of Canada in 1930. The worst depression of the century was hitting the country, and economic conditions would blunt his prospects as prime minister.

A bachelor lawyer from New Brunswick who had prospered in Alberta, Bennett was elected to the House of Commons in 1911 and became Conservative leader in 1927. After winning the federal election of 1930, Bennett tried to fight the depression by expanding trade within the British Empire. His success was limited, however, and Canadians began to link Bennett himself with the hard times.

In 1935, Bennett changed tactics, introducing his "New Deal" of public spending and federal intervention in the economy. Nevertheless, his Conservative Party was swept away in that year's election. Bennett retired to Britain and later sat in Britain's House of Lords as Viscount Bennett.

Richard Bedford Bennett died at Mickleham, England, in 1947 and was buried in the village churchyard there. He is the only Canadian prime minister not buried in Canada.