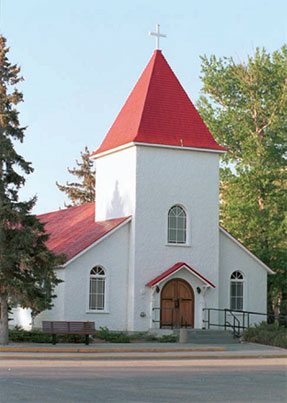 Royal Canadian Mounted Police Chapel (Building 13) Regina, Saskatchewan
© Courtesy of RCMP Photo Archives; K. Dowler, 2005
Building 13 was constructed in 1883 to serve as a mess hall and was converted into a chapel in 1895, after being damaged in a fire. It was designated a Classified federal heritage building because of its strong historical association with the presence of the mounted police in Regina, because of its symbolic representation of a spiritual force which played a continuing role in the development of the institution and finally, on the basis of its role as a distinctive heritage landmark valued not only by the RCMP community at the national scale but also by the residents of Regina.

The Federal Heritage Buildings Committee (FHBC) is an interdepartmental and multidisciplinary advisory committee, which provides expert advice on issues concerning the conservation of federal heritage buildings. It is chaired by the Manager of FHBRO.

The FHBC's multidisciplinary approach to conservation is ensured through the varied backgrounds of its members. Having representatives from custodian departments on the committee also ensures that the "owner's" point of view is taken into account in all discussions.

The composition of the FHBC is as follows:

Occasionally, depending on the specific nature of the project under review, other experts may be asked to sit on the committee. The FHBC may also have a representative from Treasury Board if the matter to be considered relates to the application of the Policy on Management of Real Property.

1 This may vary depending on the type of building or intervention under review.