Parks Canada's Federal Heritage Buildings Review Office's (FHBRO) principal role is to advise custodian departments on how to meet their heritage obligations under the Treasury Board Policy on Management of Real Property. 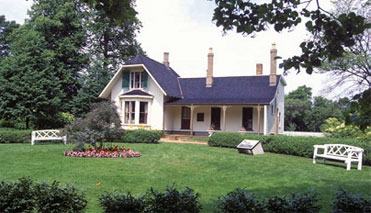 Ardgowan House, National Historic Site of Canada Parkdale, Prince Edward Island
Ardgowan House was built circa 1850-54. It is designated a Recognized federal heritage building because of its association with the process by which the British colonies united to form the Dominion of Canada, and with William Henry Pope (1854-1873), one of the Fathers of Confederation. Its country-villa design is based on the ideas of American landscape architect Andrew Jackson Downing. Ardgowan House is a well-known regional landmark.

FHBRO manages various processes that are defined under the policy, including the heritage evaluation of federal buildings, the review of proposed interventions to Classified federal heritage buildings and the review of proposed disposals. It also provides conservation advice regarding designated buildings. Lastly, FHBRO provides training on the heritage obligations under the Treasury Board Policy on Management of Real Property.

To ensure proper communication and collaboration between FHBRO and custodian departments, each department appoints a FHBRO representative, whose role may vary depending on their respective needs. Some FHBRO representatives serve only as a point of contact, whereas others coordinate all departmental consultations with FHBRO.