The wrecks of the Hamilton and Scourge lie on the bottom of Lake Ontario in 90 meters (300 feet) of water. These armed American schooners went down in 1813 during the War of 1812, and stand intact on the lakebed.

They are considered amongst the country's most important heritage shipwrecks. For decades following their discovery in 1973 they were considered under little threat from human or natural forces due to their isolated location, depth and benign environmental setting. The situation has since changed: advances in diving technologies have made the wrecks accessible to technical divers and for some ten years invasive quagga mussels (a relative of the zebra mussel) have been colonizing the wrecks.

Indeed, thick crusts of the bio-fouling mussels threaten to completely cover the wrecks. These two developments necessitated an urgent program of archaeological and scientific recording to assess the impacts of both technical diving and mussel colonization, and to formulate a plan of action. The work by Parks Canada has been in support of the site owners, the Corporation of the City of Hamilton. 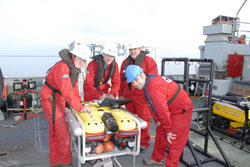 The challenge was to gather information in an environment where diving, although feasible, gives limited 'bottom-time' to gather information. All activities were conducted from the surface and required important logistical support from a number of partners. Parks Canada's Underwater Archaeology Service used a cutting-edge side-scan sonar system to image the wrecks and to precisely define the debris fields surrounding either vessel. Working with additional information from the Canadian Hydrographic Service, this allowed the Canadian Coast Guard to precisely position mooring buoys around the wrecks in the best location to avoid any damage to these fragile remains. Remotely operated vehicles (ROVs) from Parks Canada, the Canadian Navy and ASI Group Ltd. (a private sector multi-national consulting firm based in St. Catharines, Ontario) were then used to document the wrecks, using among other technologies, a dual-axis sonar system to measure the wrecks in three dimensions, and high-definition video systems. Parks Canada archaeologists are also working with scientists from the Canadian Conservation Institute to study the effects of the mussel invasion.

The Hamilton and Scourge National Historic Site assessment was a multi-stage project spanning three years from 2007 to 2009. It was a collaborative project between federal, provincial, and municipal governments as well as the private sector. In 2007, the wrecks and the surrounding lakebed were mapped using side-scan sonar. In 2008, the principal year of investigation, around-the-clock remotely operated vehicle (ROV) diving operations were carried out from the Canadian Navy's HMCS Kingston to photograph, video and map the wrecks close-up. In 2009, during a second series of dives, an ROV carefully penetrated inside the wrecks in an effort to determine the interior state of preservation, the extent of mussel colonization, and to record the interior compartments for posterity. 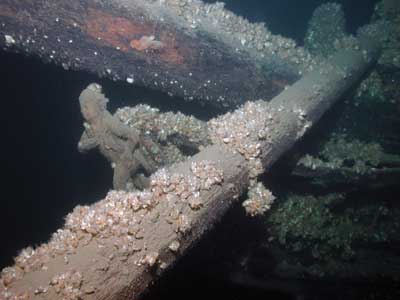 Figurehead with quagga mussels on the vessel
Scourge.Hamilton-Scourge NHS. ON.(2008)
© City of Hamilton

Data has been compiled in a geographic information system () and a portrait of the extent of mussel growth is starting to become clear; this is shown particularly well through a series of comparative photographs showing the wrecks in 1982 versus the present. Strategies for action are now being developed and the most recent 2009 project will be the subject of a television documentary.

These near-pristine sites are the best examples of wrecks from the 1812 conflict between the United States and the British Colonies in North America; the Hamilton and Scourge National Historic Site is a direct link with this important conflict. Heritage wrecks in the Great Lakes are the pride of divers and marine history enthusiasts alike and the two wrecks are considered the gems of these fresh water lakes. Canadians want to see their history protected and rely on government organizations like Parks Canada to intervene.

The Hamilton and Scourge project is only one example of how Parks Canada uses a multitude of technologies to locate, study, preserve, monitor and ultimately present our country's underwater  heritage sites on behalf of Canadians. Side-scan sonar is also being used in an attempt to locate Sir John Franklin's missing ships Erebus and Terror in the Arctic.