Rescue excavation at Fortress of Louisbourg 2010

The Fortress of Louisbourg National Historic Site of Canada (NHSC) is a coastally positioned 18th century fortress site that is feeling the effects of climate change. Since its construction, sea level has risen over 85 cm and the coast line has receded approximately 15- 18 m at Louisbourg. As the sea level continues to rise and the coastline continues to retreat, archaeological sites related to the fortress become exposed and seriously threatened or damaged by erosion along this active coastline. Parks Canada staff at Louisbourg are developing a holistic coastal conservation plan to address this erosion challenge based on a sound understanding of environmental effects, the nature and distribution of archaeological (heritage) sites near the coastline, and internationally-accepted best methods for managing threatened coastal resources. 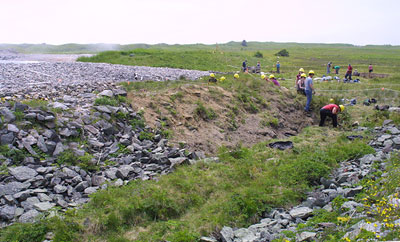 As this plan develops over the coming year, Louisbourg archaeologists continue to identify, record and conduct rescue excavation at sites that are currently threatened by erosion. Rescue archaeology is a proactive measure that allows for the recording and understanding of heritage features, such as buildings and fortifications, in areas threatened by natural forces or development activities before these features are lost. A number of technical tools will be employed for this project, including laser scanning, kite/balloon aerial photography, GIS and total station survey. 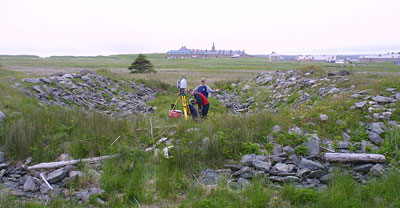 In summer 2010, a Fortress of Louisbourg archaeology team of 20 people will carry out nine weeks of rescue excavation at three threatened sites : a French masonry powder magazine (c.1756-1758), a New Englander brick powder magazine later used as a church (c.1746-1768) and a French domestic property (c.1729-1745) The sites will remain publically accessible (to visitors at the fortress). 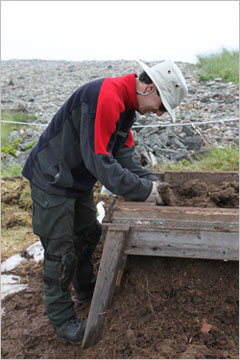 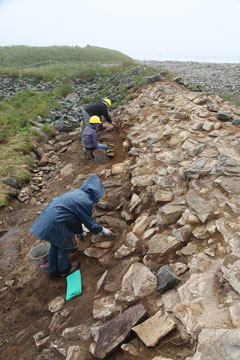