What are archaeological resources

Every trace of past human activity is an archaeological resource. These non-renewable resources are often the only tangible evidence of the passage or occupation of human groups that have disappeared or been displaced. In other words, archaeological resources cannot be replaced if accidentally or deliberately destroyed. They may be as simple as an archaeological object, an area used for flaking stone tools, an encampment, a petroglyph, a butchering site or fishing station. On the other hand, they may take a more complex form or be incorporated into towns or cities that still exist. An archaeological resource can equally be a trading post, farm, heritage path, defensive post, village or even an abandoned industrial site. This evidence of the past may be visible, located on the surface of the ground; it may be buried deep in the earth with no sign of its presence; or it may be partially or totally submerged in a lake, river or the sea. Wrecks of aircraft or ships are also cultural resources. 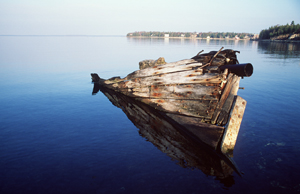 The remains of the steam tug John and Alex represent a time capsule preserved underwater. Immersion in a freshwater lake provides excellent conditions for the long-term preservation of the wooden remains. This ship, built in 1924, is partially preserved after the fire that ended its naval career in 1947. It represents a type of commercial fishing boat still used on the Great Lakes in the 20th century although it was built using 19th-century shipbuilding techniques. Many functional features may still be identified through careful recording. 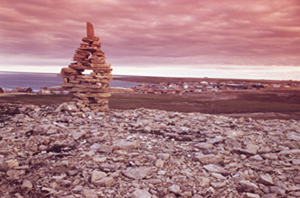 Symbols of Inuit culture and signposts of their land, Inukshuk (plural of Inuksuk) have been built for thousands of years as trail markers to aid future travellers. Across the North, these ''posts'' mark the spots where game and fish are plentiful or where a caribou cache can be found. Even today, the Inuit construct Inukshuk to point the way over the tundra and to reassure others that they are on the right path. The Inuit make Inukshuk in different forms and for different purposes: to warn of impending danger, to mark a place of respect. Similar stone figures were made all over the world in ancient times, but the Arctic is one of the few places where they still stand. An Inuksuk can be small or large, a single rock, several rocks balanced on each other, made of round boulders or flat. 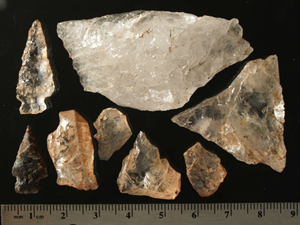 These quartz crystals and chert artifacts recovered at archaeological excavations in Banff National Park provide evidence not only of past human occupation in the area but also of the tools, lifestyle and culture of the humans who inhabited the land over 8000 years ago. As such, cultural changes can be observed through the evolution in hunting weapons — from spears to throwing sticks to bows and arrows. 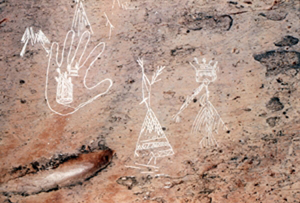 Mi'kmaq petroglyphs from the 18th and 19th centuries at Kejimkujik National Park of Canada (N.S.)

The petroglyphs of Kejimkujik represent the lifestyle, art and observations of Mi'kmaq people in the 18th and 19th centuries. These petroglyphs are one of the remaining traces of over 2000 years of Mi’kmaq inhabitation in the Kejimkujik area and provide evidence of their occupation of the land as well as their culture. 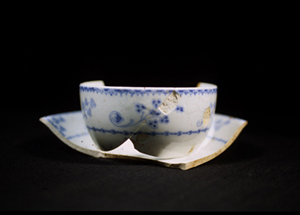 Pottery and ceramics are one of the most common archaeological resources because of their durability and resistance to decomposition. Pottery and ceramics give clues to researchers about the social status of people who used them, the eating habits and type of food, and culture-associated aesthetics.