The Red Rock Interpretive Center has exciting new and interactive exhibits for visitors to enjoy including a huge stuffed bull moose and a virtual underwater submarine tour of the Lake Superior National Marine Conservation Area!

This summer make sure to check out the beautiful Red Rock Marina Center featuring a unique and interactive exhibit of the Lake Superior National Marine Conservation Area. The grand opening took place May 15, 2015 and has since had many visitors stop in to learn about the Township of Red Rock , its history, and what it has to offer as a tourism destination.

Exhibits in the center include history on the prisoner of war camp and paper mill that once existed in Red Rock, an interactive fish species smartboard, a nature exhibit showcasing a stunning large bull moose, a virtual underwater submarine tour of the Lake Superior National Marine Conservation Area, and so much more! Make sure to stop by the Red Rock Interpretive Center the next time you're travelling along the North Shore at the top of Lake Superior to enjoy these wonderful exhibits and grab a souvenir from the center's gift shop! Located just one hour East of the city of Thunder Bay at the stunning Red Rock Marina, it really is a must see! 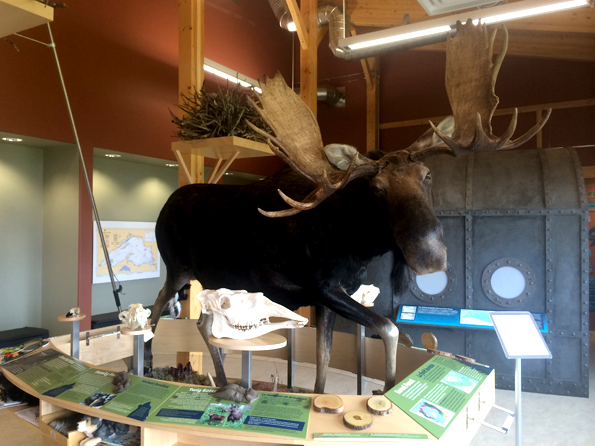 This large bull moose is the center of attention in the nature exhibit! © Parks Canada