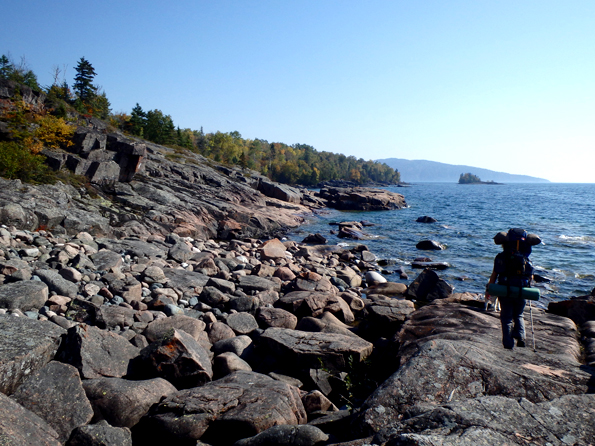 This September I decided to tackle the Casque Isles Trail, between Rossport and Terrace Bay, along the rugged coastline of Lake Superior. Experiencing the wild beauty of Lake Superior firsthand helped me realize the importance of it being designated a national marine conservation area.

My hiking companions were my friend Cally and her pup, Atka, an Alaskan Malamute. We started the trek from Rossport’s Wardrobe Park, along the Mcleans segment. The three of us donned our backpacks. Yes, even Atka had a backpack to carry her doggie kibble. Within the first ten minutes of the hike I was second guessing my decision. This was my first backpacking excursion and I realized that hiking with fifty pounds on your back is different from skipping along trails with a daypack. Thankfully the scenery distracted me from the dull aching of my back and shoulders. The first day was spent traversing mostly inland forest. Gradual inclines brought us to the top of bluffs where we were rewarded with stellar views of autumn colours. We stumbled upon multiple raised beaches; the long stretches of cobblestone looked bizarrely out of place surrounded by dense forest. By the end of the first day we had covered approximately twelve kilometres, arriving at our first night’s destination—Rainbow Falls Provincial Park. 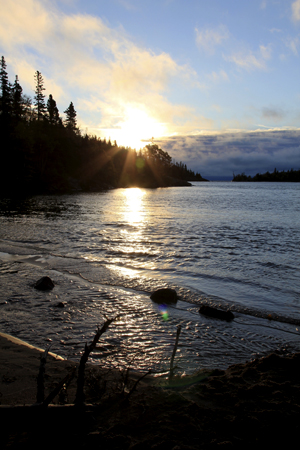 The Schreiber Channel segment of the trail has several coastal stretches. Given the nice weather on day two we took a longer lunch break to relax and enjoy the sunshine. Closing my eyes and listening to the waves lapping up on the rocks reminded me of home in Nova Scotia. With water as far as the eye can see, I understand why Lake Superior has been coined an inland sea. At dusk, and 13 kilometres later on Schreiber beach, we were greeted by Doug Stefurak from the Casque Isles Trail Committee. He had graciously groomed sections of the trail the day before our arrival. This unique trail system is made possible thanks to dedicated volunteers, like Doug, who maintain it.

Day three greeted us with ominous skies. Yet, we took a detour in the morning to check out Mt. Gwynne and its jaw dropping panoramic views. I felt considerably more nimble as my body adapted to the routine. A couple hours later we came across a sign—Death Valley—painted in foreboding red block lettering. Apparently the name refers to the ease with which Anishinaabe hunters, perched on the rim of surrounding hills, could shoot moose and caribou below. I thought this section’s name was appropriate for other reasons. Climbing over ravines and rock crevices proved to be quite the feat, especially accompanied by a dog with a newly acquired fear of heights! There were several ‘turtle’ moments where my pack got wedged in between two rocks or where I misjudged the stability of an overturned tree, resulting in me on the ground, belly up, squirming until I could right myself. To make matters worse the skies opened up making the rocks more slippery. Hours of carefully calculated steps left us exhausted and we were relieved to reach our final night’s destination on the little sandy beach of Les Petits Ecrits. 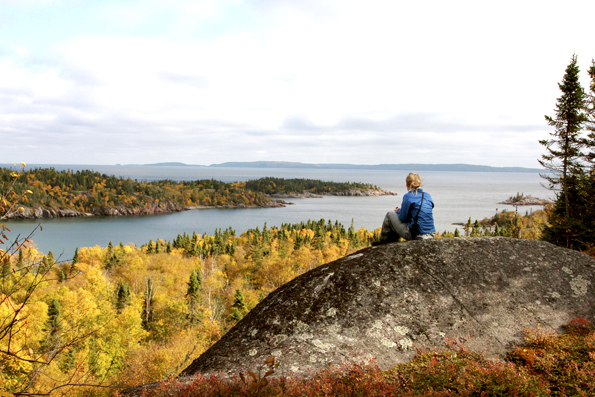 On the last day 14 kilometers lay ahead of us, but the promise of a warm bed and showers kept us going. The last six kilometres, which comprise the Lyda Bay section, include Danny’s Cove and Lyda Bay with sand so fine and soft I was again reminded of ocean beaches. This part of the trail goes through the Terrace Bay Ecological Reserve, newly acquired by the Thunder Bay Field Naturalists. The path was wider and easier to maneuver as it is well trodden by day hikers. At last we emerged from the wilderness at Terrace Bay beach!

The Casque Isles Trail has no shortage of diverse scenery. On my excursion I encountered vistas, waterfalls, rivers, rock faces, dense bush, and a variety of beaches. Often we get caught up yearning to visit iconic places far from home noted for their spectacular landscapes and forget about the treasures in our own backyards. By stepping outside of my comfort zone and embracing the elements I was able to explore the Casque Isles Trail, one of the natural gems of Northwestern Ontario. 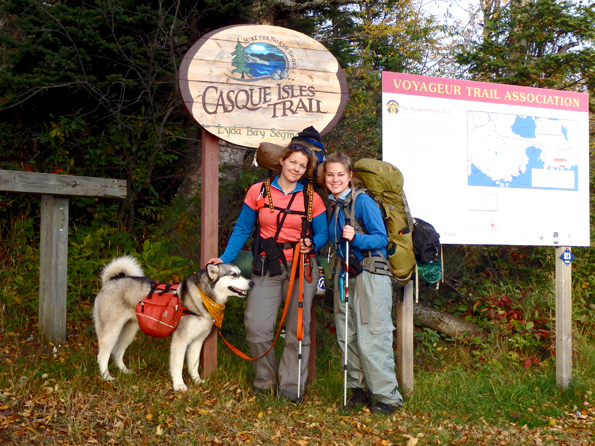