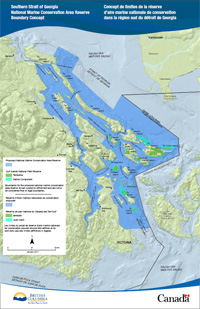 The southern Strait of Georgia proposed boundary, announced in October 2011, covers a broad area of about 1,400 square kilometres. The proposed boundary extends from the southern tip of Gabriola Island to Saanich Inlet and Cordova Bay, just north of Victoria.

Estuarine areas like the Strait of Georgia are among the most productive marine ecosystems in the world due to fresh water and ocean water mixing and upwelling to create a nutrient-rich marine environment. The southern Strait of Georgia is an important part of the Strait and it is characteristic of the marine region as a whole. It is also among the finest areas globally for scuba diving, whale watching, sea kayaking and coastal cruising. The study area was identified for these reasons.

For untold centuries, these waters have supported vibrant coastal communities and Aboriginal peoples, and they continue to do so today. A national marine conservation area reserve in the southern Strait of Georgia would help to conserve this vital marine ecosystem while allowing human uses to continue in an ecologically sustainable manner. The benefits and challenges of doing this are numerous. It is also an exciting opportunity to create a legacy for future generations - a legacy of healthy, productive marine ecosystems that benefits both local residents and visitors.

Marine Values of the Study Area