The National Marine Conservation Areas system plan divides Canada's Pacific, Arctic and Atlantic Oceans and Great Lakes into 29 marine regions. Parks Canada's goal is to represent each of these distinct marine regions with a national marine conservation area. Five of the marine regions are found in British Columbia; including the Strait of Georgia Marine region. 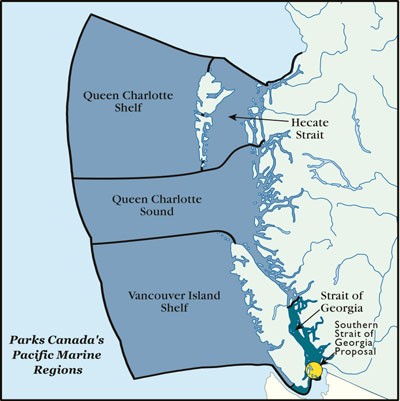 Several marine areas across Canada are being studied as potential additions to the national marine conservation areas system. The intent of this system is to conserve and present representative samples of Canada's rich and diverse marine heritage.

Characteristics of the Strait of Georgia Marine Region

The Strait of Georgia marine region is the smallest of five marine regions found on Canada's Pacific coast, yet it is also one of the most productive. It includes a wide diversity of seascapes ranging from the fjords of Desolation Sound to the broad mudflats of Boundary Bay, and from the cloudy sediment plumes flowing from the Fraser River to the clear waters among the southern Gulf Islands.

It is also the region most intensively used by British Columbians and the many visitors that enjoy these waters each year. The rich sub-tidal communities provide some of the best scuba diving in North America. In addition, pleasure cruising is world class, whether it be in a yacht or a kayak.

More detailed information on the Strait of Georgia Marine Region, is found in the National Marine Conservation Areas System Plan.