This quarterly financial report has been prepared by management as required by section 65.1 of the Financial Administration Act and in the form and manner prescribed by the Treasury Board Secretariat. This report should be read in conjunction with the Main Estimates, the Supplementary Estimates and the previous Quarterly Financial Reports as well as Canada's Economic Action Plan 2012 (Budget 2012).

The quarterly financial report has been prepared using an expenditure basis of accounting (modified cash accounting). The accompanying Statement of Authorities includes the Parks Canada Agency's spending authorities granted by Parliament and those used by the Agency, consistent with the Main Estimates and Supplementary Estimates for the 2013-2014 fiscal year. This quarterly financial report has been prepared using a special purpose financial reporting framework designed to meet financial information needs with respect to the use of spending authorities.

The authority of Parliament is required before funds can be spent by the Government. Approvals are given in the form of annually approved limits through appropriation acts or through legislation in the form of statutory spending authority for specific purposes.

Additional funding was sought by Parks Canada through 2013-2014 Supplementary Estimates B. The department received this additional authority net of the planned savings or other amounts transferred by Treasury Board authority to a frozen allotment.

This section highlights the significant items that contributed to the net increase in resources available for the year and net increase in actual expenditures for the quarter ended December 31. 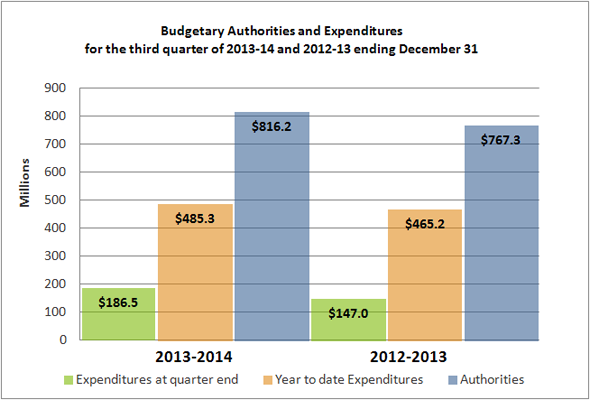 The above chart outlines the total authorities available within the Agency as of December 31 of each year, the year to date expenditures as well as the expenditures during the quarter. Further analysis is provided below.

These changes in Authorities are a result of increases totaling $119.0 million which are offset by decreases totaling $70.1 million. The increases are mainly attributable to $47.2 million carried over from 2012-2013, $28.7 million for non-recurring salary benefits, $18.9 million for urgent improvements to highways and bridges in national parks, $17.0 million to develop and operate Rouge National Urban Park, $3.0 million to recapitalize dams and locks along the Trent-Severn Waterways and a number of other small increases amounting to $4.2 million. The decreases are mainly attributable to a $19.7 million decrease for savings identified as part of the Budget 2012, a $15 million decrease as a result of the planned completion of a section of the Trans-Canada Highway in Banff National Park, an $11.6 million reimbursement to Transport Canada after the completion of the Trans-Canada Highway Twinning project in Banff National Park, a $7.5 million decrease in funding for emergency response to natural disasters, a $4.5 million decrease supporting the building of the Trans-Canada Trail, and a number of small decreases amounting to $11.8 million.

Authorities used in Vote 20 – Program expenditures during the third quarter of 2013-2014 increased by $31.6 million compared to the same quarter last year.

Statutory Authorities used during the third quarter of 2013-2014 show a $3.3 million increase in Contributions to Employee Benefit Plans and an increase of $4.6 million in expenditures equivalent to revenues.

Year to date used:
The year-to-date total budgetary expenditures were $485.3 million compared to $465.2 million reported at the same time last year, indicating a $20.1 million (4.3%) increase. This variance is mostly due to non-recurring salary benefits paid out as well as increased spending to repair extensive damage to infrastructure, as a result of heavy rains flood that occurred in Southern Alberta, and to expenditures in high risk assets.  These increases are offset by decreased spending resulting from the spending restraint measures put in place as well as the impact to our workforce following the implementation of Budget 2012 savings measures.

Expended:
As per the Budgetary Expenditures by Standard Object Table, the total expended in the third quarter ending December 31, 2013 increased by $39.5 million compared to the previous year. This difference can be explained by the following:

Personnel expenditures have increased in the third quarter by $13.4 million compared to the previous year however the year to date expenditures have decreased by $4.0 million. This is mainly due to the decrease in salary and wages expenditures resulting from the spending restraint measures put in place as well as the impact to our workforce following the implementation of Budget 2012 savings measures.  These decreases are offset by the payment of non-recurring salary benefits (i.e. severance pay) made during the third quarter of 2013-14.

The Professional and Special Services and the Repair and Maintenance expenditures have noticeably increased in the third quarter and in the year-end to date, when compared to previous fiscal year. These increases mostly relate to expenditures in high risk assets which involve projects requiring engineering consulting services such as bridges and roads and to costs for immediate repairs to infrastructure to ensure public safety following the severe flooding in Southern Alberta which occurred from June 19 to 21, 2013.

Expenditures related to Other Subsidies and Payments have increased in the third quarter by $4.7 million and by $2.0M for the year-end to date, these differences are mainly attributable to expenditures related to the expansion of the Nahanni National Park located in the southwest corner of the Northwest Territories.

Transfer Payments expenditures have decreased in the third quarter and in the year-to-date when compared to the previous year by $1.3 million and $4.5 million respectively. This is mainly attributable to a contribution agreement for Canada's fast start financing commitments under the Copenhagen Accord, and to the Trans-Canada Trail contribution that both ended last fiscal year.

Planned:
As per the Budgetary Expenditures by Standard Object Table, the total planned expenditures in the third quarter ending December 31, 2013 increased by $48.9 million compared to the previous year, from $767.3 million to $816.2 million. The items contributing to this increase are detailed in the Authorities available for use section above.

Parks Canada Agency is funded at 78 percent through voted parliamentary spending authorities appropriated over a two-year period and at 22 percent through respendable revenue of which 60 percent originate from entrance and camping fees. These revenues are impacted by economic fluctuations, competition from other parks and cultural attractions, and weather conditions.

Built assets (e.g. highways, bridges, dams, historic sites etc.) are continuing to deteriorate with the result that almost half of the Agency's built assets are in currently classified as being in poor to very poor condition. Incorporating key recommendations from an independent third-party review of the results of Parks Canada's 2012 internal national asset review, and by carrying out a strategic asset assessment will enable the Agency to focus resources on highest priority investment requirements and maximize program delivery.

These savings are being achieved through efficiencies and streamlining of operations within Parks Canada while the Agency continues to emphasize quality delivery to Canadians.  In addition, the Agency is absorbing salary increases as announced in Budget 2010, as well as inflation.

Parks Canada has implemented national human resources strategies to maintain internal networks and focus on attracting, retaining and engaging its workforce. This is aimed at ensuring that Parks Canada's professional and dedicated workforce continues to provide quality services and programs to Canadians.