About the Parks Canada Agency

This quarterly financial report has been prepared by management as required by section 65.1 of the Financial Administration Act and in the form and manner prescribed by the Treasury Board Secretariat. This report should be read in conjunction with the Main Estimates, the Supplementary Estimates and the previous Quarterly Financial Reports.

A summary description of the Parks Canada Agency’s programs can be found in Part II of the Main Estimates.

Basis of Presentation
The quarterly financial report has been prepared using an expenditure basis of accounting (modified cash accounting). The accompanying Statement of Authorities includes the Parks Canada Agency’s spending authorities granted by Parliament and those used by the Agency, consistent with the Main Estimates and Supplementary Estimates for the 2014-2015 fiscal year. This quarterly financial report has been prepared using a special purpose financial reporting framework designed to meet financial information needs with respect to the use of spending authorities.

The authority of Parliament is required before funds can be spent by the Government. Approvals are given in the form of annually approved limits through appropriation Acts or through legislation in the form of statutory spending authority for specific purposes.

This section highlights the significant items that contributed to the net decrease in resources available for the year and net increase in actual expenditures for the quarter ended September 30. 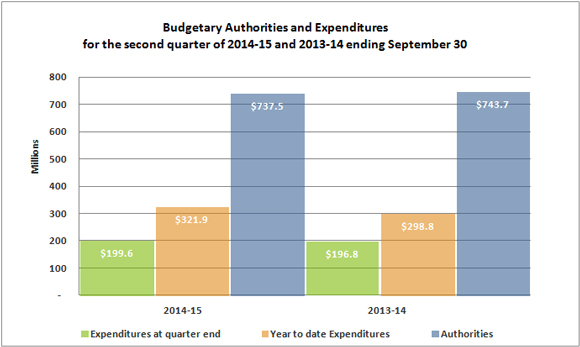 The above chart outlines the total authorities available within the Agency as of September 30 of each year, the year to date expenditures as well as the expenditures during the quarter. Further analysis is provided below.

This $6.2 million change in authorities is a result of increases totaling $40.7 million which are offset by decreases totaling $46.9 million. The increases are mainly attributable to $19.6 million to develop and operate Rouge National Urban Park, $6.3 million for providing a grant to the Trans-Canada Trail Foundation (TCTF) to match new non-federal funding raised by the TCTF to complete the Trans Canada Trail, $5.0 million announced in Budget 2013 for increased investments in dams and locks along the Trent-Severn Waterway and in historic canals, $2.7 million for the continued implementation and development of new national parks and marine conservation areas and a number of other small increases amounting to $7.1 million. The decreases are mainly attributable to a decrease of $21.6 million from the unused 2013-2014 spending authority1, a $7.5 million decrease for savings identified as part of the Budget 2012, a $5.0 million decrease as a result of the completion of work related to the twinning of the Trans-Canada Highway, and a number of small decreases amounting to $10.2 million.

Authorities used in Vote 1 – Program expenditures during the second quarter of 2014-2015 increased by $1.8 million compared to the same quarter last year.

Statutory Authorities used during the second quarter of 2014-2015 show a $0.5 million decrease in Contributions to Employee Benefit Plans and an increase of $1.5 million in expenditures equivalent to revenues.

Year to date used:
The year to date total budgetary expenditures were $321.9 million compared to $298.8 million reported at the same time last year, indicating a $23.2 million (7.8%) increase. This variance is mostly due to a one-time transition accounting treatment of $10.0 million for implementing salary payment in arrears by the Government of Canada. In addition, an increase of $10.5 million in expenditures equivalent to revenues which is mostly due to the timing delays in the recording of revenues from last year due to the implementation of Parks Canada’s new Campground Reservation System.

Expended:
As per the Budgetary Expenditures by Standard Object Table, the total expended in the second quarter ending September 30, 2014 is $2.8 million higher compared to the previous year, from $196.8 million to $199.6 million. This represents a one-percent increase of recorded expenditures compared to the same period in 2013-2014. This overall increase can be explained by the following:

Acquisition of Land, Buildings and Works expenditures have increased in the second quarter by $20.5 million, compared to the previous year, and the year to date expenditures have increased by $22.0 million. This increase is consistent with the significant new funding announced in the 2014 federal budget to improve the condition of bridges, highways and dams in national parks and along historic canals.

Expenditures related to Other Subsidies and Payments have continued to increase in the second quarter by $2.9 million when compared to the previous year and the year to date expenditures have increased by $15.3 million. The increase is mainly due to a one-time transition accounting treatment of $10.0 million for implementing salary payment in arrears by the Government of Canada, and $3.2 million related to the Establishment of Nááts'ihch'oh National Park Reserve located in the South Nahanni River watershed in the Northwest Territories.

These increases are offset by the following decreases:

The majority of the decrease relates to Personnel expenditures which is $15.6 million lower compared to the previous year and the year to date expenditures have decreased by $11.0 million. This is mainly attributable to lower costs for non-recurring salary benefits.

Planned:
As per the Budgetary Expenditures by Standard Object Table, the total planned expenditures as of the second quarter ending September 30, 2014 is $6.2 million lower compared to the previous year, from $743.7 million to $737.5 million. This is the net result of increases and decreases detailed in the above section but overall is less than a 1-percent decrease in planned expenditures as compared to the same period in 2013-2014. There is no change from the previous quarter financial report.

Parks Canada Respendable revenue represents 15 percent of the total Parks Canada spending authorities. 19 percent of these revenues originate from Real Property and Business Fees which are impacted by economic fluctuations, and 62 percent of revenues originate from entrance and camping fees which are further impacted by competition from other parks and cultural attractions, and weather conditions.

Parks Canada’s built assets continue to deteriorate with the result that almost half of the Agency's built assets are classified as being in poor to very poor condition. Under the 2014 federal budget Parks Canada has obtained an allocation of $391 million over five years to make improvements to highways, bridges and dams located in national parks and along our historic canals. Based on an independent review of Parks Canada assets, the Agency has started a five year program for the targeted investments in priority assets in the portfolio to address health and safety and structural integrity.

The fire season in Northern Canada was hotter and drier than normal. Wood Buffalo National Park (WBNP) had a significant season with 36 fires, totaling 261,850 hectares burned (compared to 36,000 hectares burned in 2013). Three large fires in WBNP were multi-jurisdictional and jointly managed with the Northwest Territories.

All Parks Canada Agency savings measures related to Budget 2012 have been implemented.


* Includes only authorities available for use and granted by Parliament at quarter-end
1 The Parks Canada Agency operates on the basis of a two-year appropriation, whereby any surplus amount reported at the end of a fiscal year is carried forward and is available to be used the following year. However, any portion of the unspent funds not spent at the end of the two years is lost. This process differs from that of other government departments as they can only claim five percent of their operating vote and twenty percent of their capital vote through the carry forward process each year.